The Error Of His Ways

Off to Lincoln this morning for our first agility show in a while. After our first run we're still looking for that first clear in grade 6. Doggo did all the hard bits but then refused the tunnel, twice. Hmmm. I dump him back in the car to give him time to ponder on the error of his ways. Instead, I take MD for a walk around the competition rings, where he is thrilled to be able to offer plenty of vocal advice and the benefit of his vast inexperience to all the competitors.

Back to Doggo and on our second course we do it, our first clear in grade 6. Never mind the fact that we cock-up our last run, we come home with a rosette for 11th place. MD, though, seems unimpressed.

I have Radio 5 on for the most of the day but there is no mention of the Cycling's World Road Race Championships, which are taking place at Varese in northern Italy. So I assume that Nicole Cooke hasn't managed to add the World title to the Olympic one she won in August... that is until I get home, read about her momentous victory on the internet and watch the highlights on digital TV. Honestly, she becomes World as well as Olympic champion and practically no one in the media notices. 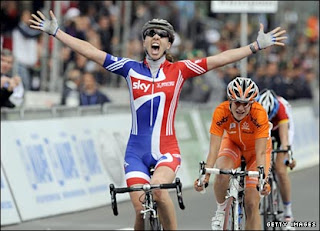 Another surprise is Derby winning at QPR. Things appear to be on the up.

We stay in tonight as I have my duathlon tomorrow and L tries to recreate last week's energy giving mix of fish and dessert. It's a pretty good effort. Then I have just one beer and a relaxing early night. Which wasn't quite that relaxing, because as far as L's concerned it's now winter which means she's started wearing all sorts of exciting stuff to bed.
Posted by FitForNothing at Saturday, September 27, 2008