With a duathlon on Sunday, I don't want to bike in but I do risk a run, which is a bit kinder on the legs. I take it easy, just like I did in last Sunday's race.

L's at home again today, amusing MD. Whom she says has been an absolute monster all morning. I don’t believe a word of it, such slander against our perfect pup.

The sandwich van, which returned earlier in the week, has now gone AWOL again. So no lunch again.

As I prepare to leave work, I receive a message 'Come, oh Knight in shining armour, rescue me from these two animals'.

Does she mean from perfect pup and Doggo the hopeless one? Hmmm. I would love to rush home on my white horse, only it's not white, it's red and it's the unreliable Red Arrow.

Tonight we take a trip up to the Leadmill in Sheffield to see the promising new band 'White Lies'. They sound excellent, early Killers with a touch of Editors in there. So I couldn't really pass that one up.

We arrive early to find that the gig is in the Leadmill's cosy backroom, nice and intimate. We catch some of the set by the Post War Years. Hailing from Leamington Spa, they produce a nice mish-mash of pop, rock and electro. Lots of keyboards and the like but with some rocking guitar riffs added in, and a touch of wailing vocals.
They remind me a little of our own Late of the Pier, perhaps with a dose of Cold War Kids mixed in. Their stuff perhaps needs some work but it sounds promising. 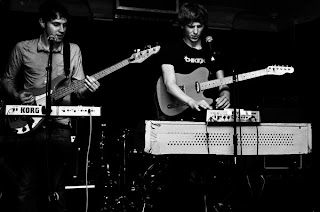 Following them on to the stage are the Joy Formidable. Bleach blonde vocalist and guitarist Ritzy (female) and bass player Rhydian (male) are both from Wales. A drummer called Justin from Devon completes their line up. I thought Ritzy was making eyes at her Devonian percussionist but actually it's Rhydian who's her partner. Oops, hope I've not stoked up any sexual tension in the band.

I do like their sound, early 90's though it may be. They remind me a lot of the girl fronted rock bands of that era. There are certainly comparisons to be made to bands such as Echobelly, Breeders, Belly and one of my lesser known faves springs to mind, the Heart Throbs. In fact, there's a lot of Tanya Donnelly about lead singer Ritzy, even though she's Welsh. She's definite the focal point, doing lead vocals and sashaying around giving her guitar a hard time. She's also a girl who seems to like to spend a lot of time on her knees... nothing wrong with that... and she spends a fair proportion of the gig down there, fiddling with her guitar strings and her effect pedals.

Overall, they look quite a prospect. Their debut single ‘Austere’ is just out and they close their set with it. I hope to hear a lot more from them. Excellent. White Lies certainly have something to live up to.

As well as support band threatening to upstage them, White Lies also have a lot of hype to live up to, previously known as 'Fear Of Flying', a band who received lots of acclaim but little success. The band has now seemingly reinvented themselves and are creating a bit of buzz.

The opener 'Farewell To The Fairground' gives grounds to their tag of Killers wannabes. It's rather too heavy on the keyboards and on the drums for that matter. Lead singer and guitarist Harry McVeigh obviously realises this too and appeals to the sound engineer to turn the guitars up, which he duly does and they metamorphose from the Killers into something more beefy, resembling, perhaps, I have to offer these comparisons, the Psychedelic Furs.

Charles Cave is on bass, Jack Brown on drums and they have an unofficial fourth member on keyboards who is rumoured to have been in the now obsolete Mumm-ra. Oh dear, never mind, he's obviously got over it. 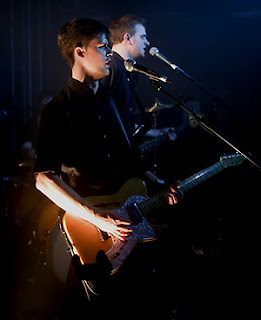 Draped in black and trying to look as miserable as possible, the band showcase tracks from their forthcoming debut album, barely pausing to take breath between tracks. L likes the chorus of 'To Lose My Life', 'Let's grow old together, so we can die at the same time'. Romance isn't dead.

April's debut single 'Unfinished Business' is third up and sounds much better than the download blagged off the internet. The crowd are really getting into the gig but after 'From The Stars', which means three of the first four tracks they play have been available on the net, the audience go a bit subdued, as the band play stuff they don't know. White Lies do a nice line in bleakness and at this point, they descend heavily into it for about four tracks. This is wonderful but the crowd do kind of watch in awe rather than join in. 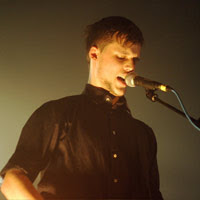 They then finish with the current single 'Death' which reignites the crowd but I can't help but feel that putting this somewhere in the middle would have made it a better set.

The album is apparently finished but isn't due out until January. I don't understand that, if it's ready, release it for Gods sake.
Posted by FitForNothing at Friday, September 26, 2008