I do my usual Thursday run into work and the old ageing limbs hold up well. I again have to skirt around the building works, that I now know are for the new £175M Raynesway Business Park. Didn't anyone tell them that we have all the empty office space that any city could possibly need here on Pride Park and they're still blindly carrying on building.

L's also feeling the onset of the years at the moment; she complains she feels about 90. What a coincidence, we feel the same age.

You have to laugh. Contractors who were painting Blackpool's North Promenade on behalf of the Council took an astounding approach when they came across a discarded sock tied to the railings. Rather than remove it, they painted over it. Therefore, Blackpool now has a shining silver sock on its promenade. At least it will look good as part of the illuminations. 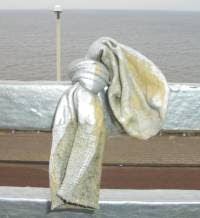 They probably hadn't been trained in sock removal. It's a good job they didn't get Chichester council to do it. These were the council workers who refused to remove rubbish from a bin which had fallen into a four inch deep stream because they were not trained in the use of Wellington boots, so a safety harnesses was required.

No sandwich van again. I end up having to walk miles to get a sandwich. At this rate, I'll be buying off the Oggy Oggy pasty van.

We're at Portland for squash this week and I'm hoping to take advantage of the fact that my opponent has been on the rice cakes only diet for the last fortnight. Being at Portland hopefully also means that we'll manage to get out of the court without the trouble we had last week. A new paint job at Clifton made the court door jam and it took us sometime to escape.

Then again, Portland might have it in for us. It's our first time there since we almost fainted in the too hot conditions and I've since put in a formal complaint. So if they see my name on the booking, they'll probably turn the heating up extra high and nail the changing room door shut. I suppose this might help my opponents attempts to lose weight. His partner would be so impressed if he went home having lost three stone.

As it happens, they seem to have the temperature sorted. I lead 2-0 until he injures himself, which annoyingly seems to improve his game and it finishes 2-2.
Posted by FitForNothing at Thursday, September 18, 2008