Running Up That Bloody Hill

This is a long one, so bear with me. It's been a busy day.

L suggested it and I took the bait. This is how I come to be here on the start line of the Crossdale 10k and looking down a mini cliff face. It's not really my sort of race, it's not a road race, it's more of a cross-country and my ankles, ravaged by years of football, don't do uneven surfaces. The start is VERY downhill, which means, as it's pretty much an out and back course, that the finish is going to be VERY uphill. They warn us at the start about some large rabbit holes. Great. I can just see myself disappearing down one.

But how hard can it be? Last years times seem to be quite slow, 40 minutes would put me in the top 10. Which is food for thought but basically, it's just a training run for my duathlon season, which starts next week and in any case, I'm full of fish and strawberry tart.

Well here we go. The race is started by the new face of Trent FM's breakfast show, Emma Caldwell and at first, my pace is very quick, well it would be, as we free fall down the cliff face without a parachute. The first couple of kilometres are pot holey but nothing too gargantuan, beyond that the course is quite flat and firm.

I get into a small group with three others and we chivvy each other along. All chaps, in fact I don't remember seeing any women anywhere, which isn't good because L always tells me you have to enjoy the view in these races. The reason for this, I find out later, is that they're all behind me... that's never happened before.

I have to say it goes well and it's almost enjoyable until one of my group decides to go for home, 2km from the end. This seems crazy to me, because I was thinking of easing up at this point, to save myself for the mountain climb to the finish. I have no intention of following him but I just can't give in that easily, so I give it a go. I hope that the two of us can shed the other two hanging on behind me. We lose one of them and at first, I lose the other running up that bloody hill (as Kate Bush would say) but half way up I run out of puff and he comes past me. Never mind, I'm sure I heard someone say 42 at the bottom of the hill, it's not worth fighting for places that low.

I cross the line and L gives me a right telling off for telling her it was just a training run. It seems that I've unintentionally come in 15th. That's rather good. If I'd known, I might have found a bit more, BIG might though. Fish and strawberry tart must be the way to go, for training runs at least.

After some lunch at home, we head off to the cinema for a double bill of films concerning the holocaust at Broadway. I know, cheerful subject matter for 3pm on a Sunday afternoon but £6.50 for two films, not bad eh?

First up is La Vita è Bella (Life Is Beautiful). Made in 1997 in Italian by Roberto Benigni, who also wrote, directed and starred in it. I believe his real life wife played his screen wife too.

Its 1930s Italy and carefree Guido is careering downhill in a car without brakes, through a village where he is mistaken for the King. This is the first of many comical scenes as he falls for a schoolteacher called Dora, who 'fell out of the sky'. He calls her 'Princess' and despite the fact that she is engaged to another guy, Guido actively pursues her, popping up all over the place where she is. Including one scene where he pretends to be a school inspector and ends up giving an impromptu speech on Arian superiority, a hint to what is to come later in the film. Guido is Jewish.

Swayed by his persistence, his humour and the fact her fiancé is a jerk, she gives in and he gets his girl, whisking her away on a green horse. Green because they painted over the anti-Jewish slogans that were daubed on it. Guido and Dora disappear into what appears to be a greenhouse and when they emerge, five years have passed. They are now married and have a child. 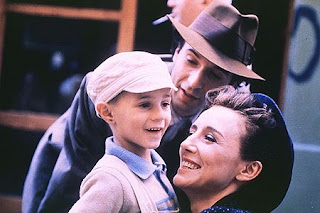 Guido opens the bookstore he's always dreamed of and they live a happy life, until the occupation of Italy by the German army. Then the film gets more serious. Guido is sent to a concentration camp along with his son, Giosue. Dora, who isn't Jewish, drives to the train station and demands to be put on the same train.

Once at the camp, the men and women are separated and a child is usually immediately disposed of but Giosué refuses to take a shower, and unknowingly escapes being gassed. His elderly uncle isn't so lucky. Guido manages to hide Giosué, and to help his son survive the horrors of the camp, he tells him that it's all an elaborate game and that the prize for collecting 1000 points is a tank.

Guido's quick mind saves Giosué from the truth when a German officer requires a translator. Despite not speaking a word of German, Guido volunteers and makes up the words to back up his claim that it's all a game, while cleverly adding that Giosué cannot cry, ask for his mother or say he's hungry. 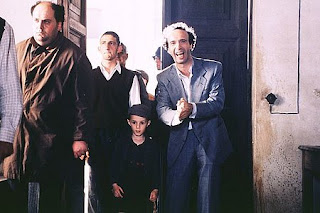 As the end of the war approaches, time runs out for Guido, he hides
Giosué for the last time, telling him that everyone is looking for him. Guido jeopardises his own survival while he attempts to find Dora and he is taken away and shot.

The next morning, the Americans arrive at the now almost deserted camp. Giosué emerges from hiding just as a tank pulls around the corner. He is thrilled to have won the game. Hitching a ride on the tank, he finds, and is reunited with his mother.

Complete silence after the film and everyone obeys the unwritten art house cinema rule and stay for all the credits. Even I felt a bit choked at the end.

An excellent film, that controversially mixes humour with the Holocaust. It won Academy Awards for Best Actor, Best Foreign Film and Best Dramatic Score. Despite that, it's been criticised for not giving a true depiction of a concentration camp. Which is true, it doesn't dwell on the horrors of the camp and the camp security is at times laughably slack, but nor does it totally ignore these issues.

The film is primarily about a man's relationship with his family and in particular, his son. It shows the great lengths and the sacrifices, in the end the ultimate sacrifice, that a desperate father will go to, to protect his son.

After a 40-minute break to debrief and a quick pint of Elsie Mo we move on to the next film.

Whereas 'Life Is Beautiful' exhibited a charm and style far removed from the usual Hollywood big budget style, the next film was a much more typical offering.

'The Boy in Striped Pyjamas' is about another lad who doesn't realise that the Holocaust is going on but unlike Giosué this is down purely to his own innocence. Bruno (Asa Butterfield) is a German boy who is forced to move to a new house when his father (David Thewlis) becomes the commandant of a concentration camp. Bruno hates their new home and misses his friends. He spends a lot of time sulking in his bedroom, where, through his window, he spots a fence behind which he sees people wearing 'striped pyjamas'. 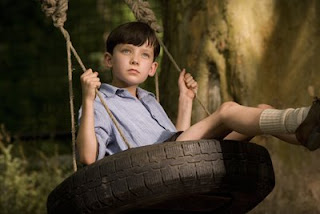 Bruno is forbidden to leave the confines of their new house and garden but eventually, out of pure boredom, he goes exploring and finds the camp. There, amongst more implausibly slack camp security he meets a fellow eight-year-old, a Jewish inmate called Shmuel (Jack Scanlon). He soon becomes Bruno's friend and Bruno starts to visit him regularly.

'Life is Beautiful' had comic elements that meant you had to forgive any inaccuracies but 'The Boy In Striped Pyjamas' appears to be serious throughout but had the implausible premise that Shmuel had also escaped being sent straight to the gas chambers, without hiding. Instead, he had been set to work in the camp but still manages to sit at the camp fence undetected long enough to talk to Bruno everyday. No wonder they never seemed to get any further building the hut they were allegedly working on. 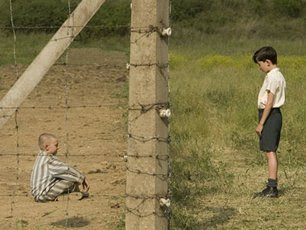 Back home, Bruno and his sister are being schooled by a private tutor. He sets about trying to brainwash the children into the Nazi way of thinking.

Bruno's mother (Vera Farmiga) isn't impressed by this and then when she finds out what they're really burning at the camp, she goes mad at the thought of her husband's part in such barbarity. She plans to take the children back to their old house but before he goes, Bruno, probably taken in by the cheery propaganda film of life in the camp that he had seen, he agrees to go under the camp fence to help Shmuel find his missing father. To do this Shmuel supplies Bruno with a set of striped pyjamas.

They are unable to find Shmuel's father but before Bruno can return home, the inmates are all marched into the shower block. Someone probably found out they hadn't really been building that hut. Both Shmuel and Bruno are trapped in there as they pile in the Zyklon B.

For the second time today, everyone sat quiet right up until the end of the credits but unlike earlier with 'Life Is Beautiful', I felt little emotion at the end.

For me, the film really missed the spot. Perhaps it was because we saw the superior film first and 'Life Is Beautiful' had a more powerful ending. The main problem with the film is that you're supposed to feel sympathy for the Germans and I simply didn't.

The camp commandant deserved to feel some grief and Bruno lost the sympathy vote when he betrayed Shmuel by giving him food when he was summoned to clean glasses in their house and then saying he stole it. This was despite the fact that he must have known the consequences because he'd already seen what had happened to their Jewish servant Pavel when he made the mistake of spilling some wine.

The long Hollywood build up to the ending also took the shock away. Then there's the fact that that everyone had a flawless English accent rather than their native German. The film desperately wanted to be 'Schindler's List' but it wasn't. Despite that the acting was good, some of it excellent. David Thewlis was very convincing as the camp commandant. Just as his wife described him, a monster.

Another debrief, another Elsie, and some food before heading home.
Posted by FitForNothing at Sunday, September 21, 2008