The Lengths People Will Go To Get A Mention

I'm in the car because we're back at the pub today and I'm driving. So rather than do my, now usual, Thursday training run to work I get up at 6am, again, and take a rather too keen Doggo for a run around the pond, not that he’s very conducive to good training. I think he's keen because he it's a bit of P&Q away from MD, we all like a bit of that.

I give Daughter a lift to school again; she’s taken to sitting in the back of the car and reading a book. Most odd, perhaps I need to change my deodorant. I feel well knackered as I drive to work, now I remember why I gave up those early morning runs.

Derby may have been looking forward to a League Cup 3rd round tie against big spending Manchester City, although it may have only turned out to be their reserves but now that is no more, after Brighton knocked them out in their delayed 2nd round match last night. Unfortunately, we always lose to teams like Brighton.

In the evening, I get home and I'm greeted by MD, who can barely get up, he looks that tired. Seems L's been out walking his paws off again, getting her own back. Our perfect pup has again helped himself to a loaf of bread. So, I suppose I should be grateful that she brought him home at all, rather than tying him to a lamppost somewhere.

I get changed and meet L at the vets, where she's walked with Doggo. She offered to take him to the vets for his annual jab on her own but that's no simple task. You have to slide him across the waiting room floor because he won’t walk to the consulting room and then you have to pull him out from among the vets computer cables, so that she can jab him. He's actually slightly better than that this time but only slightly.

We have a quick snack, not that MD has left much bread for us and what there is has teeth marks in it. Then it’s off to the Rescue Rooms.

We've been here before, done that, bought the t-shirt. Well L did, when we saw Glasvegas a few months ago in Derby.

It wasn't that long ago but it still seems ages since we've been to a gig. Well tonight, starts off the traditional autumn gigging season. We have ten sets of tickets lined up a home, well eleven if you count the one that L's going to without me, but that a story for another time. I'm sure it won't stop at ten, as other gigs are sure to be announced. Glasvegas themselves are back in Nottingham in December but we haven't considered that one yet. Suppose it depends how tonight's sold out gig goes. Tickets were £8 only but have been going for £30 on eBay. L and I have tickets numbers 1 and 2, yet again.

First up are Infa Red from Kent, or right down south as they helpfully explain. They are a five piece indie band although the keyboard player needn't have bothered as you can barely hear his tinklings over the guitars. Their Myspace describes their music as 'dynamic, driven anthems'. I'm not sure about that. There's definitely a large dose of early Editors about them. That at least appears to be what the lead guitarist listens to on his Ipod. You can also hear it in the singer's voice. 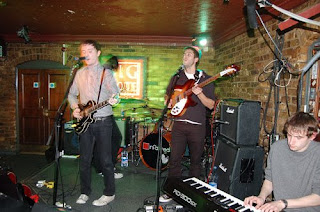 The lead guitarist cuts a strange figure tonight. We reckon he's left his best jeans scrunched up on his bedroom floor and forgot to give them his mum to put in the wash because the pair he's wearing are well knackered. You can see he's tried to repair the broken fly with a safety pin but he seems to have even botched that up. He's conscious of it because he keeps pulling his shirt down to cover the debacle. It kinds of takes our attention away from his guitar playing which isn't actually too bad. L reckons he's just trying to get a mention in my blog. Well it worked but honestly, the lengths people will go to get a mention.

There seems to have been a lot of water under the bridge since we last saw Glasvegas. They now have an album out, which is number two in the charts, kept off the top by the new Metallica album, as evetone keeps saying, even Infa Red mention it. There's also been a lot of off-putting tabloid hysteria written about them. Which is a shame really because it means that the boozed up lager boys are in tonight, punching the air, putting on fake Scottish accents and throwing their beer around. Particularly annoying for us because we've blagged a spot right in the line of fire, down the front.

They kick off as they did when we saw them in June with 'Flowers And Football Tops' and then proceed to play pretty much the same set as before, in almost the same order. They add just one track, managing now to fit in a whole nine tracks.

The one track they add, 'S.A.D. Light' is excellent tonight and a definite highlight. It is such an insignificant song on the album but like much of their material, it takes on a different life live. From this point on they seem to find their stride. 'Polmont On My Mind' which follows it, also sounds fantastic live. Then comes the always excellent 'Geraldine', again sounding superb. This is proper 'Geraldine', not the polished near-disco version that's included on the album, where I'm sure they've used a drum machine. 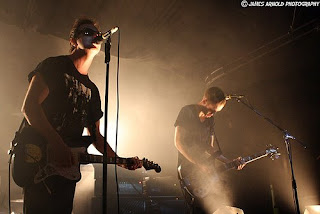 Personally, I find the album, rather dull and disappointing. For a start half of it, including the four singles, has been around for three years now but mainly because the record simply doesn't catch the band's sound at all. They've taken away all the rawness of those much loved demo tapes and smoothed down all the rough edges. You can even hear and understand James Allen's words without looking them up on the internet, which is unforgiveable.

Thankfully, live they still sound pretty raw. 'Go Square Go', slowed down to practically a ballad on the album, is back to full throttle tonight and the lager boys love it, drunkenly chanting 'Here we f***ing go'.

James Allen is really getting the hang of this rock star lark, with his shades in place for most of the night. Although he lowers them briefly when the crowd ask him to 'show us your eyes', he still says little, letting the songs do all the talking. 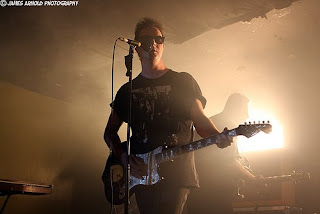 'Ice Cream Van' leads us into the predicable finale of 'Daddy’s Gone', which is as good as ever. Although he does the unforgivable and hands the mob vocal duty half way through.

When it's over the crowd pick up where he's left off, continuing with 'he's gone, he's gone' but yep they've gone. Still only 45 minutes and still no encore. We know they have other older songs, we know they do a cover of 'Be My Baby', we know they have an new EP being readied for Christmas. They could even have played 'Stabbed', maybe the upbeat 'I'm Gonna Get' version.

Tonight Glasvegas are still excellent, still powerful, still distinctive ... but it feels as if they're simply on autopilot, being told what to play, in what order and no more. There's no spontaneity, no surprises. I suppose it's too much to ask to be blown away twice by the same band but if they want people to keep coming back, they're going to have to offer a bit more.

The photos are thanks to James Arnold, who I don't personally know, but I reckon he was stood next to me. There are more great photos of the gig on his fickr site here

We retire to the Ropewalk for the traditional post-gig Leffe.

It's a good night for music in Nottingham. White Lies are at the Social tonight. Unfortunately, we can't be in two places at once. We can however be in Sheffield tomorrow to see them at the Leadmill.
Posted by FitForNothing at Thursday, September 25, 2008