A Bit Of 'Rough' On A Sunday Night

An uninterrupted lie in this morning followed by a pond and park run with Doggo and L.

Then it’s time for some football. Derby who are usually consistently embarrassing in the FA Cup, live down to expectations by going 2-0 to Sheffield Wednesday with some more of their trademark comical defending. For a change though they claw themselves back from the brink to draw 2-2. Winning the replay might not be beyond them if the promised new signings materialise before then.

On the way home I collect L from Sainsbury's, cook and then we head off again to Broadway. We break our AF Sunday with a half of Nottingham Noel 4.7%, presumably a festive special which is oddly not available at the Plough.

I've only seen one of Ang Lee's famous 'masterpieces', that being 'Crouching Tiger, Hidden Danger' and that never really thrilled me that much. I've often just not fancied his subject matter but it appears I may have been missing out.

Tonight we see his new film, 'Lust, Caution'. Set in Hong Kong and Shanghai during World War Two at the time of the Japanese occupation. The story follows a young girl called Wang Jiazhi who has been left behind by her father, who has escaped to England. She gets asked to take a part in a patriotic play. A symbolic moment as she ends up working for the resistance and lands herself an 'acting job' for life.

The resistance group she gets involved with are not only amateur dramatics but also turn out to be a right bunch of amateurs in the resistance stakes too. They devise an audacious plan to assassinate the powerful Mr. Yee, a Chinese traitor who is working for the Japanese. They wish to remove him but they know little about him, he is very much an enigma, always cautious and always very well protected.

Masquerading as Mrs. Mak, Wang Jiazhi is chosen to infiltrate the social circle of Yee's wife and thereby catch the eye of Mr. Yee. The resistance's plan is to use her as bait to lure him out into the open where he can be assassinated by the others. He however is so cautious, they realise that it is not going to be that simple and Wang has to be prepared to have a full-blown affair with him. To 'train' for this eventuality she gives up her virginity for the good of the cause, practising with a very unappetising fellow resistance member. In the end though the plot goes awry, a botched murder follows, and Wang flees.

Time moves on and in Shanghai three years later she again encounters the same resistance fighters, this time they are better organised, and the plan is revived. Yee is now the head of the secret police in charge of hunting down and interrogating resistance agents.

She has no problem catching his eye and attempts to seduce him but he is already one-step ahead of her. He is not a man to be seduced and instead rips her clothes off her and forces himself on her. Wang's 'training' would not have prepared her for that. It is scenes like this that have already made the film notorious. At first to him, she is just an outlet to release his repressed lust and the pent up anger and frustration of his job and his life. In order to keep his trust, Wang has to go along with these rough fantasies and fulfil her patriotic duty. 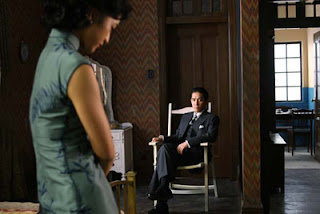 The scenes do calm down and don’t to me feel gratuitous or out of place. They enable you get to see inside Yee's character, the bedroom is the only place he relaxes his caution, revels in his lust, and occasionally appears human. These scenes reveal a lot about both of them as their liaison gradually exposes their joint weakness. The same weakness. That they have fallen for each other. 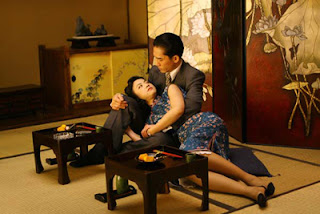 We were very worried that at two and a half hours, the film would be too long and drawn out but no, it did not feel long at all. The story was well paced and used the time well. Also I usually find subtitles hard work. I often find the dialogue too quick and I don't keep up or I forget to read them. This was the case here too for a while but half an hour into the movie the plot became so gripping and the film so mesmerizing, that I forgot about the subtitles because they had become part of the film. Another reason the subtitles got easier was later in the film there were less of them, as less needed to be spoken. The actions were enough. The scenes of the two of them together were fraught with a psychological tension and I found myself holding my breath. 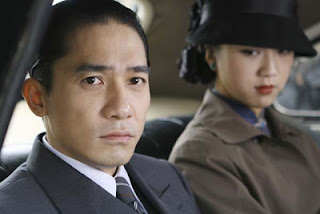 This is a great film with so much to it and huge emotional complexity. It builds to an ending when Yee finally relaxes his caution too much. The end was slightly surprising but all the better for not having a predictable Hollywood ending. I'm sure people who don’t like ‘art’ films will slag off the whole movie and people who don’t have sex will criticise the sex scenes but the first words L spoke after the film were ‘absolutely brilliant’ and she is right.

I have possibly seen the best film of 2008 already and we're only six days into the New Year. If this isn't it then it's going to be one hell of a good year at the movies. Two and a half hours very well spent.
Posted by FitForNothing at Sunday, January 06, 2008