Eccentricity, Chaos And A Bit Of A Limp

It's only one degree this morning, so it's a little cold on the bike but not really too bad and only a little icy. However I'd rather be on my bike than attached to a neurotic collie in slippery conditions, as L was.

The ride in is uneventful, unlike the ride home when my rear wheel goes down a pothole in Spondon and the tyre immediately deflates. I'm sure that hole wasn't there last week. So I have to stop and change the tube.

The lost time means that by the time I get home I haven't really got time to take Doggo out. What I really need is for him to be up for a ball session in the garden but he isn't, he doesn't look at all interested and instead skulks under the kitchen table, constantly giving me the eye as I cook up a chilli for tea.

After feeding the kids I head off in the car to collect L from the babe zone that is BTT at the leisure centre, then we head off for a quick Landlord/Leffe before tonight's gig. At L's request we are off to see British Sea Power at the Rescue Rooms. I'm a big fan of theirs but their gigs can be rather eccentric and a bit of an acquired taste.

As we walk to the venue I check the football score on my phone. Derby are already one down in their cup replay at Sheffield. Things are going as expected e.g. not very well.

We get to the gig in plenty of time, which is very rare for us but the venue is already pretty full. However we spot that the balcony is still sparsely populated so we head up there and manage to get a good spot, straight in front of the stage. We even catch the main support band 'Make Model' but we have missed openers 'John et Jehn'.

'Make Model' sounds like something to do with Airfix kits but they turn out to be a new up and coming band from Glasgow. They come over as a bit of a 'pop' Arcade Fire, and they have almost as many members. Having only just released their first single 'The Was' before Christmas and with no album yet in the offing, they are very much in their infancy but they certainly show promise. They have some great slow building songs. One to watch out for I think.

As I've already mentioned British Sea Power are an eccentric bunch. I mean how more eccentric can you get than moving from Kendal to Brighton. Ok I'm old, Kendal is probably dull if you're young but Brighton?

Tonight their usual stage decorations of foliage and assorted stuffed animals are gone; in their place are what look like various random signalling flags. As the band come on stage to the new album's opening overture 'All In It' it is without their army uniforms. Instead they look as though they had started to dress up as Morris men but thought better of it and abandoned the idea part way through.

They are without their drummer Woody tonight, who had recently injured his back. They tell us he's at home on decorating leave. He's been temporarily replaced by Tom White of the Brakes and also of Electric Soft Parade. White usually plays guitar so for him to turn his hand to drums and learn the material in just a few weeks is admirable.

Following the sequence of the album, they launch into 'Lights Out For Darker Skies'. Then comes the recent single 'Atom' which is accompanied by an air raid siren that is brought onto the stage. An old favourite 'Remember Me' follows. Their violinist accompanies them on most tracks, although the sound of that gets pretty much lost in the mix.

After four songs main singer Yan hands over to his brother Hamilton, who sings three tracks all pulled from different albums. Hamilton does not have as strong a voice as his brother but he seems to sing on some of the better material. Whether this is because of his voice or whether the songs would be even better if Yan sang them I'm not sure. 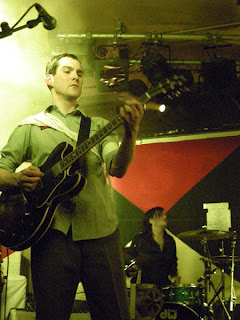 For our vantage point, I realise that the Rescue Rooms is far too small for the amount of people they have in it tonight. They may have worked out the capacity on available floor space but as the venue is such an odd shape, a lot of the floor space offers little or no view of the band; hence everyone has to cram in near the stage. I'm glad we've up on the balcony and even that was about five or six deep.

Yan returns to sing the current single 'Waving Flags', an ode to the Polish plumbers and Slovak waitresses now working in our country. Well it makes a change from singing about polar ice-shelves and Arctic explorers.

The brothers then trade the lead microphone for the rest of the night. Throughout, the audience is rather deadpan as are the band. There's little in the way of banter but it appears that none is expected from the faithful.

The instrumental 'The Great Skua' takes on new proportions when it is played live. How many bands play instrumentals these days? The track is truly immense tonight and accompanied with great visuals, although Tom White gets in the way of most of them. 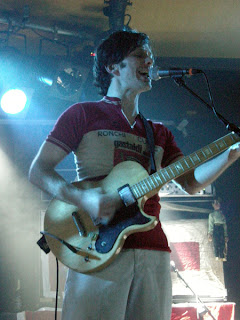 The set list consists mainly of tracks from their new album, 'Do You Like Rock Music?' but with a fair smattering of tracks from their debut, we get a superb rendition of the brief 'Favours In The Beetroot Fields' but little from 'Open Season', notably 'Please Stand Up' but oddly 'How Will I Ever Find My Way Home'.

A storming 'Down On The Ground' and 'A Trip Out' would have been a good way to finish but this isn't their way and they take around twenty minutes to churn out the final two tracks.

Firstly we get the obscure but mental 'Spirit Of St Louis'. During which the air raid siren is given another airing and it all descends into muddled insanity. Guitarist Noble swaps his guitar for Yan's tambourine and ascends the steps to the balcony. He then proceeds to climb, Spiderman like around the outside of the balcony, even navigating his way around a pillar. Surely a manoeuvre he must have practised earlier. Some bands do a sound check, BSP it seems have climbing practice.

Just as we're wondering what will happen when he runs out of balcony he throws the tambourine to the bar staff, descends into the crowd and then swims back on a sea of hands back to the stage. Priceless but even so the song dragged on a bit.

Then they close the set with the full eight minutes and some more of 'True Adventures'.

They return for an encore and play an awesome 'No Lucifer' and the popular 'Carrion' before more larking about ensues with their regular improvised finale known as 'Rock In A', which apparently has been known to go on for three days but thankfully is a little shorter tonight. I lose track of who's on stage as someone new seems to take up the guitar, perhaps a roadie or a member of the support band? Another girl appears from somewhere, does a lot of shrieking and appears to start a 'friendly' fight on stage. Noble is once more in the crowd and surfs around the room on his back, pointing the microphone at anyone who wants to contribute to the chaos.

BSP have some great three-minute pop songs and if they stuck to that, which is what they are good at, they would probably be massive but they always seem to have the urge to extend everything into a ten minutes epic. Unfortunately 'epic' is not quite the result. As L says after, it was three quarters of a good gig but still pretty damn good.

Some amazing news on the way home. Derby have beaten Sheffield Wednesday 4-2 on penalties after the game finished 1-1 after extra time. So we're off on a cup run, well more a limp really but we'll take anything at the moment.
Posted by FitForNothing at Tuesday, January 22, 2008