Listen To Your Daughter

We start the day with a high-quality lie-in followed by a session with Doggo on park.

Then I drive over to Derby because it's FA Cup 4th Round day. Derby have only to beat lowly Preston to progress but of course it doesn't work out that way. Derby are pathetic in defence again and lose 4-1. Which doesn't bode well for next season, let alone the rest of this. Paul Jewell's record at Derby since he took over isn't exactly impressive. Not exactly the 'bounce' we'd hoped for.

In the evening we head into town and to Broadway. Tonight it's 'Sweeney Todd: the Demon Barber of Fleet Street', which, half an hour before the start, they are queuing down the stairs to get into see. We go in the bar and wait for the commotion to die down and enjoy a pint of Legend.

Oddly Daughter has been against us going to see Sweeney Todd, although we've been struggling to understand why. I think it's something to do with her being a big Johnny Depp fan and this, because it's very violent, has been classified as '18' so she can't see it. So I think she expects us to wait four years until she is allowed to see it. With hindsight, it appears she's probably been tipped off about how dull this film is and was just trying to save us from it. We should have listened.

The story itself is pretty interesting. After being sent away for fifteen years for a crime he claims he didn't commit, Benjamin Barker returns to London with the help of a young sailor. Now calling himself Sweeney Todd he wants revenge on the judge who sent him away. He returns to his old barber shop where Mrs. Lovett (Helena Bonham Carter) now runs a shop selling 'the worst pies in London'. Todd believes his wife is dead and the judge now has his Daughter, Johanna as his ward. To complicate matters the young sailor he came home with, is trying to seduce Johanna, and wants Sweeney to help him in this quest.

Mrs. Lovett convinces Todd to resurrect his old barber shop and after a 'shave-off' with a chap called Pirelli, played eccentrically by Sasha Baron Cohen, he establishes himself as the best barber in London. This is one of the better moments of the film. Depp's shaving blade is a whir, almost as if reprising his role as Edward Scissorshands, as he wins the contest. I think there was supposed to be humour in the film but the only titter from the audience came at the hands of Baron Cohen during this screen.

His reputation established, Todd gets some customers but instead of give them a close shave, he slits their throats and Lovett uses their bodies to make her meat pies, which she then sells to her unsuspecting customers. The gratuitous throat slitting, and there is an awful lot of it, is overdone, there's too much ketchup and it's not very scary. We've seen it all before but the main problem with the film is that it's a musical but without any tunes or singers. The songs are all mundane, unremarkable ballads and everything is sung in monotone, so much so that a lot of it is unintelligible. Depp is clearly no singer and nor is Bonham Carter. The 'singing' ruined what could have been a good film because the film's 'look' was amazing. The sets of a grim London were very good, complete with rats. Which reminded me of something funny L read out in the paper this morning, that in London you are never more than five minutes from a Starbucks, or a rat. 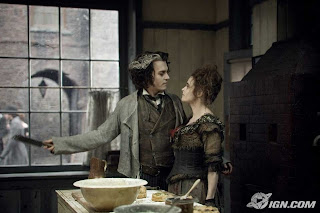 So, perhaps if the music had been totally done away with it might have worked, but in this format, for me, it just didn't. The script was padded out with songs rather than with storyline. Right from the start the film was a long slog with little or no tempo to it. L was looking at her watch early on and I didn't blame her.

The best acting came from the ever excellent Alan Rickman as Judge Turpin. Although he appeared to be simply reprising his role as Severus Snape from Harry Potter, which I'm not sure was the intention. Then even he spoiled it by showing his lack of singing skills.

The most chilling scene was at the end, when Bonham Carter gets incinerated in her own oven, that bit was priceless. 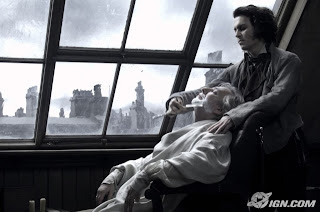 Once it was over, the audience just got up and left in silence, hardly anyone commented on it, such was its lack of effect. All rather boring I'm afraid. L and I usually agree on the good films but not often on the bad ones. One of us usually likes them but not in this case and it takes us a whole bottle of Argentine Malbec to get over it. Well it actually takes an Orkney Red McGregor as well.

So listen to your Daughter and don't go. It's '18' for a reason, not for the gratuitous blood, or the burning alive, but to protect the sanity of the young.
Posted by FitForNothing at Saturday, January 26, 2008