Goth On A Lead

No squash again tonight so I'm very tempted to bike but also feel very tired. It’s the fault of all them psychos in the pool last night. So I'm on the bus.

In the news today is a lad from Yorkshire who leads his girlfriend around on a dog lead. They're in the news because they've been stopped from getting on the local buses because of fears for passenger safety. The bus company is insisting that he remove the girl's lead before boarding the bus or perhaps they just don't like Goths. Oddly, this isn't what they ask you to do if you take a real dog on a bus but never mind. 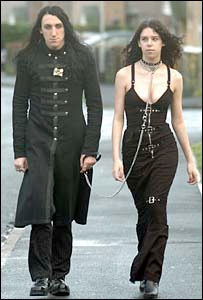 There are a group of students reading out the article on the bus. they are laughing because apparently, the girl likes wearing a collar and lead and says it was all her idea. Even though previous boyfriends called her a 'weirdo' for suggesting it. Her new chap doesn't mind, he describes her as 'animal like, kind of like a pet, as well as a partner' He said he 'does everything' for his pet, including laying out her clothes for her, feeding her and cleaning their house. 'You wouldn't expect your cat or dog to do the washing up.' Well it would be nice if he did.

This sets the students off on their own tales of weirdness. One lad was on about his ex, who had a penchant for not wearing underwear, which he didn't have any complaints about. Until the day she rang him on his mobile to tell him, when he was in his car, on a hands-free kit, with his brother. They split up. Now she's seeing his brother.

In the evening Son and Daughter are at a gig, L bought them the tickets as Christmas presents. It's Linkin Park at the Arena and neither L nor me what to go, so it's just the two of them. Daughter is very keen to play on the fact that this is Son's first time (at a gig), we advise her it's not wise to use the 'V' word.

We drop them off and they wander off, pretending to not be with each other. We park up near the Vat & Fiddle pub and take Doggo for a run. We run across the Embankment and head down past the City Ground. We do around an hour; L is really on top form. Naturally she doesn’t believe me that she's got a good pace on. I reckon we did about seven miles.

Then we sit in the pub and wait for the signal to collect them. Just as we've got a second drink in, Daughter texts to say the encore has started, surely not, it's too soon. As we try and speed up our drinking we get another saying 'or not'. We relax but no further messages arrive, so at about ten to eleven we go in search of them. They are waiting for us, Daughter's phone had packed up and naturally Son hadn't taken his. That apart, I think they had a good night.
Posted by FitForNothing at Thursday, January 24, 2008