After being conned by the British weather yesterday, I'm back on the bike today, complete with hot coffee. It's actually not as cold as it looks and certainly not cold enough to snow, so that's probably that for another year.

L informs me that Daughter has been apprehended trying to buy the Vicar of Dibley DVD set from Argos. Now we were not aware that this was a crime but apparently it is, if you're under 15. L had to go down, chaperone her and vouch for the fact that she won't be allowed to watch them unsupervised or something like that. Bizarre and in any case Argos are wrong, they carry a 12 certificate. 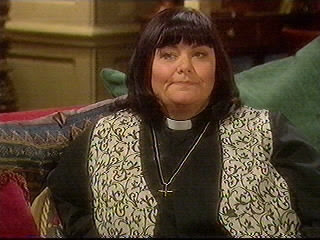 We are unsure what to do tonight. We have talked about going clubbing but we're not sure what to do about the dog. I'm not sure he’d like the club. Also, Friday is usually his pub night and if we try and leave him, he'll go all 'pathetic eyed' on us, to try and make us feel guilty. Not that he'll be that bothered about the pub as it raining outside. Mind you the pub should be good because L's in a wine mood, which usually means they'll have a corking range of beers on. We retire to the bedroom to discuss it, kind of.

In the end we stay in. Radical eh? We have a few beers, some wine, and catch up with the two Jools programmes we missed.
Posted by FitForNothing at Friday, January 04, 2008