L tells me off for teasing our friends last night, by telling them that we wanted an early breakfast e.g. 7.30 ish. They usually provide breakfast for us and it's always a bit of a military operation. They are up cooking before 9.00 which actually isn't bad for a holiday and breakfast is duly served at a fairly reasonable time.

Last night the wind was very strong but it appears to have dropped now and the sun is out, so our walk is most definitely on. We open the front door to find that a couple of sheep have taken up residence on the grass outside our cottage. This of course upsets Doggo immensely.

We ascend the hills behind the cottage and walk over to Grasmere. The weather is glorious, the views fantastic. Doggo misbehaves with a few sheep and gets the usual slap around the ears, which of course makes no difference.

We underestimate how easy the walk is and it takes us only around an hour and half to get to the lake outside Grasmere. So we sit in a café at the edge of the lake and have a drink in the sunshine. This is the life. Our friends and Daughter haven't joined us; instead they drive around in the car and do so some shopping on the way. For some reason they, in common with a lot of Lakeland tourists, prefer this, Daughter even text's us to say how much she's enjoying being cooped up in the car. Incomprehensible.

We accept a lift back to the cottage, as planned, although really we had plenty of time to have managed the walk back.

Back at the cottage Doggo again manages to briefly escapes my watch, in order to see off the sheep who are still taking the Mickey outside our front door. Ears slapped again. 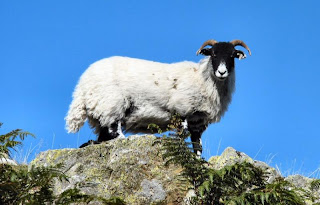 Derby lose yet again. This time 3-1 at Portsmouth but a Benjani hat-trick is going to do wonders for my fantasy team. So mixed feelings.

In the evening we head down the local for a meal and several Lancaster Bombers, although L's on the wine and finds a rather cheeky Rioja. Everyone restocks on the carbs after their hard day out on the fells. Oh hang on a sec, it was only L and I who were on the fells, and we're the ones on the healthier options.

We sneak home a bottle of blue alcopop for Daughter, bubblegum and blue raspberry flavour WKD. I have never tried one before and it's 'interesting' to discover that it looks and tastes like the bubble gum panda pop she used to drink when she was younger. Only difference is this one has an ABV of 5% because it's got Vodka in it but of course as vodka is tasteless you're not going to notice that. They tell us these drinks aren't aimed at youngsters...
Posted by FitForNothing at Saturday, January 19, 2008