So How Do You Expect A Coen Brother's Film To End?

I am woken up by the wind which is howling around the house. There is a clatter outside which is probably the 'milk minder' disappearing down the drive. The sexy shorted one has been awoken too. There's only half an hour until the alarm goes off, so it's really not worth going back to sleep. It's not difficult to think of a fun way of killing the time.

For once I feel I made the right decision not to cycle, it was difficult enough to walk against the wind. As I walked from the bus, I passed a few cyclists who were walking too, pushing their bikes.

Near death experience on the way home. Driving the Red Arrow was some young impetuous bus driver; he looked about twelve. I'd not seen him before and I hope I don't again. He tried his hardest to kill us all, banking the bus around the tight corner of the slip road on to the A52, accelerating all the way. The woman in front of me spills her shopping on the floor. Another chap is struggling to get his headphones to stay in his ears; such is the G force. Then he's weaving in and out of all the BMW's etc, I hate to think what speed we're doing. It’s the first time I've seen people voluntarily fastening their seatbelts on the bus. Amazingly some chap next to be sleeps through the whole roller coaster experience.

L and Doggo walk up to meet me. Doggo tows us all back home, he's creased now which is a good job because again he's not getting a proper trip out tonight.

My parents come around, much to Doggo excitement, and then we all go out without him, much to his disappointment. We drop them off at the Arena for 'Strictly Come Dancing'; this is easier said than done. The traffic is hell, unlike at a gig almost everyone is driving there.

Once dispatched we park up and head to Broadway. A quick Beartown beer and then we see the new film from the Coen Brothers 'No Country For Old Men', which is an adaptation of the novel by Cormac McCarthy. It is a perfect choice for them. I am sure they must have chosen his novel because it is so close to their usual style.

Llewellyn Moss (Josh Brolin) is out hunting somewhere near the Mexican border when he stumbles across a host of dead bodies. Further investigation reveals a drug deal gone wrong complete with a truck full of drugs and bag containing $2M in cash.

His mistake is to make off with the cash and so from originally being the hunter, he suddenly becomes the hunted, as he is pursued by several interested parties. Chief among these is a unconventional hit man with pageboy haircut, who has been hired to find him. This man, Anton Chigurh (Javier Bardem), has two weapons, a silenced shotgun, and pneumatic air gun normally used on cattle. He leaves a trail of bodies in his wake as he relentlessly pursues Moss. 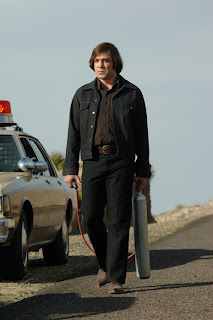 For some time Moss evades him but you just know it’s going to end in tears, or rather blood, at the hands of the clearly unstoppable and psychopathic Anton. He is a killer without any humanity, no one gets in his way. Even being involved in a car crash fails to stop him. When he is shot by Moss we get a great scene of him fixing the bullet wound in a leg, which reminds me of Terminator but with extra blood.

Meanwhile the local ageing sheriff (Tommy Lee Jones) is supposed to be chasing them but doesn't really want to. This is ‘no country for old men’ and he doesn’t really want to get involved.

The drugs people also send another hit-man, the cocky Carson Wells (Woody Harrelson) who Anton doesn’t want on his patch, so he gets rid of him too.

If there’s a moral to this film, I guess it’s just that the money isn't worth it but Moss quickly goes beyond the point where Anton would let him return the money and live. Anton offers to spare his wife if he returns it, but not him, and there is no chance of negotiation. Moss chooses to have one last try to keep his life and the money. Although Moss’s motives are mainly greed, you still feel yourself rooting for him. 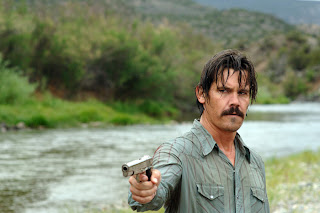 The film builds the suspense but then just as you're gripped by the two main characters and their riveting duel, things change. In true Coen’s style, events you would think to be crucial to see, are not shown and Moss winds up dead but you don’t see it happen. Later when Anton finds his wife and tells her he’s going to kill her because he's promised her husband, you presume she winds up death but again you don’t see it.

The film is a very well-crafted thriller, tense with moments of humour but also brutally violent. Far gorier than Sweeney Todd. While the plot itself isn't too complicated, the characters are. I was gripped for every moment of it, every time the truly frightening Anton is on screen you feel nervous of what he's going to do next. My only criticism would be that after the breakneck pace of the first hour and a half the last bit plodded a little.

Obviously there is no happy ending. Well there really wasn’t an ending at all but then again, how do you expect a Coen brother's film to end. They leave you with a load of dangled threads that you expect to be neatly tied up but as is often the case with their films, it never quite works out that way.

We collect my parents, in far easier traffic this time, and head home, for a small drop of white wine and a slightly larger drop of red.
Posted by FitForNothing at Thursday, January 31, 2008