Lock Up Your Daughters

The Americans are coming, so lock up your Daughters and all that. That is Derby County are now in American hands, yee haw.

Quite why they want Derby is anyone's guess. They seem to think they'll get the whole world buying Derby County shirts. I hate to criticise but that seems a tad optimistic.

The new Chairman introduces himself, and his family at a press conference. I hope he knows what he's doing because I must question the judgement of someone who calls their kids 'Brock', 'MacCall', 'Avery' and 'Quinn'. Think he's got his surnames and christian names mixed up. I just hope Jewell Paul will get some money to improve the defence. I wonder how long they'll stay. We do seem to have a takeover every year or so at the moment.

I'm in Sainsbury's at lunchtime where I'm treated to a truly horrifying sight, a chap in a flowery shirt, Bermuda shorts, and sandals, in January. Not that it would be tasteful even in summer. Our thoughts go out to his wife and family at this sad time.

Just before the end of the day L gets in touch by email, its been such a long time since I've heard from her. Somebody must have finally managed to plug the right cable into the right hole at AOL.

If football clubs were women, adultery would be rife. Dennis Wise walks out on Leeds to become the new tea boy at Newcastle. Apparently even Keegan doesn't know anything about it. 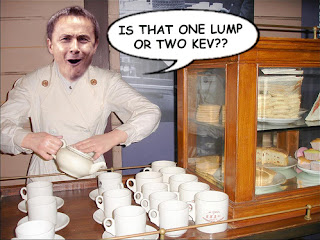 Where's the sense in that, other than short-term financial gain. If he wanted a better job, the best way was to get Leeds up, and then they'll be plenty of Premier League clubs asking him to name his price to be their manager. Mind you there are plenty of Leeds fans offering to pack his bags for him; in fact it appears that all of them are.

I get home and get a text from L saying she's stressed (AOL I guess) and needs chocolate. At least she didn't ask for Leffe. Won't I do? Unfortunately the animal and I are off training.

The training itself goes well which surely bodes badly for the event we have on Saturday. Frustratingly on the way home the A52 is closed for repairs, so we've late meeting L.

L's still feeling frazzled, so it's straight to bed, for chocolate and de-stressing, without Leffe. Excellent.
Posted by FitForNothing at Monday, January 28, 2008