On the bike again today and this time no unexpected mishaps.

There's a funny bit in the news that Jeremy Clarkson, who likes to think of himself as a bit of a rebel, has in fact made a bit of a fool of himself. He rubbished the furore about the loss of those computer discs with everyone's personal details on. He said it was a lot of fuss about nothing and wanted to prove it, so he gave out his Barclays account number and sort code in his column in the Sun newspaper. He even told people how to find out his address.

"All you'll be able to do with them is put money into my account. Not take it out. Honestly, I've never known such a palaver about nothing", he said.

However some bright spark managed to use the information to create a £500 direct debit on his account to the charity Diabetes UK. I hope you saw the funny side Jeremy. 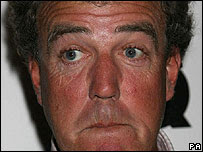 L seems to be getting in touch with her oriental side because she's recommended another 'dodgy' Chinese film that's coming to Nottingham soon, to me.

She's at another fitness class tonight, yoga again; she's been working seriously on her upper body. Which sounds good. Hopefully pumping that chest up. She says she won't be able to lift her Leffe at the weekend. I’m sure she’ll cope, even if she has to use a straw.

I cycle to the pool where it's very busy. So busy in fact that it looks like World War Three has broken out among the psychos in the top two lanes, so I end up in lowly lane three where the girls in the bikinis reside. Life is tough. It's a mixed blessing really, aesthetically it's not too bad but I don't like mixing with the un-sporty types and the pace is nightmarishly slow. It doesn't go too bad, despite the cold that L seems to have gifted me. Bless her. She did warn me and yes perhaps I should have kept my distance from her as she suggested but it was well worth it.

Later we have the first of our now 'free' trained dog classes and the old man is not too bad. Then home to work on L's upper body.
Posted by FitForNothing at Wednesday, January 09, 2008