Makes No Sense At All

We've all been looking forward to seeing Andy Murray do well at the Australia Open which starts this morning. As my alarm goes off he's fighting back from losing the first two sets and appears to be making a pig's ear of the fourth after winning the third. He loses before L's even finished in the shower. Oh well, here we go again. 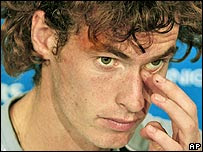 I expected the traffic to be bad so I take the 'scenic' route through Ilkeston. In fact there were problems at the M1/A52 junction so it was a good call.

Daughter's latest saying is to calling everyone a ‘twig’. L seems quite pleased with this phrase and sees it as flattering in her quest to be slinky for her LBD. I’m not so sure.

Interesting tea tonight, Monkfish, posh chips, and Bluebutton mushrooms (whatever they are). Quite an experience and all very nice.

We watch the final part of Jane Austen's Sense and Sensibility which we taped last night. As I discover it is very inappropriately named as it makes no sense at all.

It all comes out in the wash as they say. It turns out that in the opening scene of part one what we witnessed was Willoughby deflowering Colonel Brandon’s ward, Eliza. Brandon was once in love with his brother's wife, who ran away and had a child out of wedlock. The child became Brandon's ward. History repeats itself and the same fate befalls his ward, getting illegitimately knocked up that is. Having done the impregnating, Willoughby legs it, and moves on to have a pop at Marianne but instead he is forced to marry someone else because she is better endowed, with money that is. The men, it seems, go where the cash is.

So Marianne has to articulate her desires elsewhere. As there's a shocking shortage of men, she cracks under pressure, and plumps for old man Brandon. She employs almost the same distressed female trick that she pulled on Willoughby but this time without the cliff top and ends up in Brandon's arms. Then before you know it she's transformed herself from frivolous to frumpy and is popping round to perform, as requested, on his pianoforte. I really can't see what she sees in him, I think he's incredibly creepy but then I'm a man, L thinks he's 'lovely'. 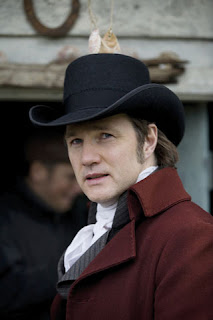 What Marianne doesn't know is that he only wants to marry her because she reminds him of his brother's wife and of her daughter but of course he can't have her because she's been placed in his care. So it's a case of bring on the sub. Annoyingly for him both Eliza and Marianne seem to be gagging for Willoughby. 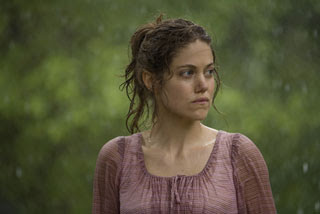 Meanwhile drippy Edward is being lined up to marry some other cash endowed female while being secretly engaged to another for FOUR years, a destitute one who's only after Edward's money. Neither of these women are the shockingly dull Elinor. When Edward's mother disinherits him for wanting to marry the wrong girl, his fiancée follows the inheritance and runs off with his brother. It's all about the money! So having lost both of these women Edward settles for third choice, his mother tells him that at a push she'll do, and Elinor is thrilled to bits. Romance eh? I know it's supposed to be the eighteenth century but even so I'm ready to bang my head on the coffee table by this point. 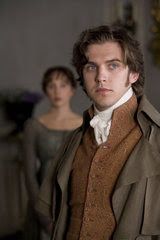 There's clearly something lacking in all this and after I'd read up on it I realise that if Andrew Davies was looking for an 'edge' to the story then this revolves around Eliza but is glossed over. Bleak House it isn't but perhaps that's not Davies' fault, you can only work with the material you've got. Jane dear, you must do better.

We retire to bed and L accuses me of post-watershed seduction but it wasn't my fault, it was her shorts that made me do it.
Posted by FitForNothing at Monday, January 14, 2008