It's not such a nice day today, in fact it's drizzling but still L, Doggo, and I go out for a run to burn off some of last nights indulgence. I assume the others will go out later. I'm reluctant but not as much as Doggo who isn't keen to have his jacket on and hides under the table.

The sheep outside our cottage have called in reinforcements; there are now four of them. Doggo however is still up for the fight so I keep a very close hold of him. Thankfully the rain seems to stop as soon as we start running.

Our chefs are getting faster and breakfast is already ready before we go out but we delay it by running, so it's our fault that it’s all a bit dried up.

We take a trip to Coniston to hopefully get to see something of the famous Bluebird boat which they dredged up from the bottom of the lake a few years ago. 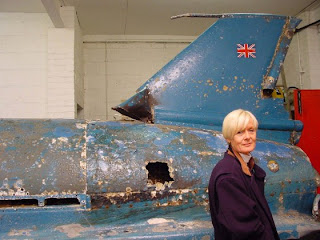 However, we are too late to get into the museum. We'll have to come back some other time, in any case they only have the tail fin in there at the moment the rest of the boat is currently being rebuilt by the Bluebird Project.

Reluctantly we soon have to leave the Lakes and head back south. We have the best trip home that we’ve possibly ever have. The M6, and I shall regret saying this, is almost a pleasure.

Somehow in our absence Son has managed to empty the freezer of pizzas, all three of them, despite the fact he only had one meal to cook for, as we left him chilli for Friday and L cooks for him tonight. Pizza for breakfast anyone?

All in all, quite a virtuous weekend, apart from the alcohol, which translates into 34 units in total for the week. Foodwise though, I don't feel guilty about rounding the weekend off with the traditional curry. Very nice it is too. To compensate I promise to do 100 miles on my bike this week. I also sample the 8% Hawkshead beer we picked up, it's only a half pint and it's nice but nothing spectacular. Then I join L in a glass of the 'cheeky' red, we also brought home.
Posted by FitForNothing at Sunday, January 20, 2008