Daughter is flying solo on the paper round this morning but she does pop in to lighten the mood of our 'lie in' part way through her two and half hour paper round. The Saturdays are bigger and she also does the evening round because oddly the Evening Post is in by 9am.

When we get up I take Doggo out for a spot of football on the park and then get home and clean my bike. The car is also crying out for a wash but the bike comes first.

Tonight is twelfth night, twelve drummers drumming and all that, officially the end of Christmas. The day all decorations should be down, unless you have bedecked the front of your house with Christmas lights, in which case August appears to be fine. In Victorian times, decorations were taken down and burnt; now there's a tempting thought...

This is because people believed that tree-spirits lived in the greenery of the Christmas tree, holy, ivy etc. It was thought that, if you left the greenery in the house, the tree-spirits would cause mischief until they were released. This is probably why Daughter's loft hatch keeps opening by itself.

Twelfth night is also when the X Factor winner is officially forgotten about. Oh you remember him, don't you, err, perhaps not, forgotten him already.

Daughter goes off to see the St Trinian’s girls in their stockings and suspenders, as it’s someone birthday. Sounds like a good birthday treat to me or it would have been if they’d got to see it. Instead they see ‘PS I Love you’ which I think is another of those 'romance with a dead person' films. Meanwhile L tells me that I’m ‘gallantly’ accompanying her to see a fairy tale.

She has been raving about 'Stardust' since she saw it a few months ago. She says it's a toss up between that and 'Eastern Promises' as her film of the year. Now there's a contrast.

It doesn’t start well as I spill my coffee down me before the film even starts.

'Stardust' is based on a book by Neil Gaiman and tells the story of a chap called Tristan (Charlie Cox), who's from a place called Wall, a village with a wall at its perimeter. He’s in love with one of those attractive but thick types, a girl called Victoria (Sienna Miller) but she doesn't take him seriously, so when they see a shooting star fall, he pledges to prove his love for her and bring it back for her birthday.

The star though has fallen on the other side of the wall. There is a gap in the wall but its guardian will not let Tristan pass. His father consoles him and explains that he once ventured through the wall himself. He explains that on the other side of the wall lies another world known as Stormhold. While he was there he met a beautiful girl being held captive by a witch. He couldn't manage to rescue her, so he settled for the next best thing, a quickie in the back of her caravan and voila Tristan me boy, that's where you came from. It could happens to any of us. His mother had left him a Babylon candle, which he lights and seconds later he's lying on top of Claire Danes. Good stuff these Babylon candles. 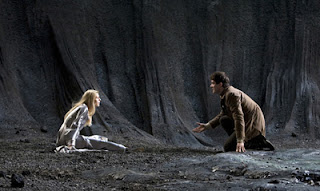 It turns out that when shooting stars fall to earth they turn in to pretty girls, hence Danes or rather Yvaine, as she's known. So all he's got to do is get her back to Victoria. Which I'm not sure would go down that well... but never mind. Anyhow it's not going to be that easy because I've forgotten to mention the dying king, his seven princes all trying to kill each other, who when they die become excellent ghosts, and the ruby necklace that the king threw away, which was what brought down Danes in the first place.

Just to complicate things, the evil witch Michelle Pfeiffer is also after Yvaine, to rip out her heart and eat it, which will replenish her youth and by God she needs it. Michelle you're looking a bit rough today or is that a very good make-up job.

Then there's the encounter with a flying pirate ship, that I'm not terribly sure about, but it does provide a great stage for its captain (Robert de Niro). A man who has a tough guy exterior but behind his cabin door is barely out of the closet. 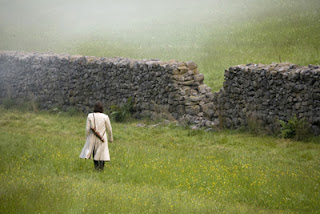 Stardust is a very engaging, full on, fairy-tale with an undercurrent of adult wit. It boasts great imagination and a refreshingly creative storyline that wasn’t too over the top, although I did kind of see through the plot pretty early but that didn’t really matter. I found it highly entertaining and great fun, although as with a lot of these tales I thought the ending was dragged out a little too much.

Daughter is still out when we get back and we have to wait for her return before we make our apologies to Doggo again and head into town. We check out the Cock ‘n’ Hoop but we don't stay and end up in the Keane's head again on the XXXB and the Elsie Mo.
Posted by FitForNothing at Saturday, January 05, 2008